Numerous paeans from more ancient times exist that extol the Goddess.  Apuleuis in The Golden Ass (11.25) says of Isis:

You rotate the globe. You give light to the Sun. You govern the world in time and space. You tread down the powers of Hades. By You the seasons return, the Planets rejoice, the Elements serve. At Your command the winds do blow, the clouds do gather, the seeds prosper, and the fruits prevail. The birds of the air, the beasts of the hill, the serpents of the den, and the fish of the sea, do tremble at Your majesty.
The Devi Mahatmyam is chock full of statements such as:

You are the sovereign Goddess of all that is moving and unmoving. You are the sole substratum of the world, existing in the form of Earth. Existing in the form of water, the Universe is nourished.  You are pure, limitless courage, the power of the All-Pervading Lord. You are the Manifesting and Limiting Principle, the primordial seed of the Universe. Goddess you have created this living dream that we mistake for Reality. Through your grace we are redeemed from it. (11:3-5)
We also find this passage within the very last piece of scrying work that Edward Kelley (1555 –1597) did with John Dee (1527–1608):

I am the daughter of Fortitude, and ravished every hour, from my youth. For behold, I am Understanding, and Science dwelleth in me; and the heavens oppress me. They covet and desire me with infinite appetite; few or none that are earthly have embraced me, for I am shadowed with the Circle of the Stone, and covered with the morning Clouds. My feet are swifter than the winds, and my hands are sweeter than the morning dew. My garments are from the beginning, and my dwelling place is in my self. The Lion knoweth not where I walk, neither do the beasts of the field understand me. I am deflowered, and yet a virgin; I sanctify, and am not sanctified. Happy is he that embraceth me: for in the night season I am sweet, and in the day full of pleasure. My company is a harmony of many Cymbals, and my lips sweeter than health itself. I am a harlot for such as ravish me, and a virgin with such as know me not: For Lo, I am loved of many, and I am a lover to many; and as many as come unto me as they should do, have entertainment. . . .
—From A true & faithful relation of what passed for many years                                                          between Dr. John Dee and some spirits

Dee, a mathematician and prodigious Renaissance man who was an advisor to Queen Elizabeth I, having become immersed in angelology and evocation magic, produced, with scryer-side-kick Edward Kelley, the foundation for Enochian magic. By gazing into a shewstone/black mirror (akin to crystal-ball gazing), Kelley pulled out of the aethers a unique, “angelic” language and Dee and Kelley were given elaborate instructions by presumed angelic entities  about ritual set up for practices; coded, politically charged messages; and a method to “ascend” through angelic planes. But for all the glorious effort, neither Dee nor Kelley had very good luck in the aftermath of their workings. Did they barge head-first through a door behind which was the Goddess practicing katas with her swinging saber?

Immediately following this oft-quoted material (above) scryed by Kelley and Dee on May 23, 1587 (their very last scrying session by the way, occurring about a month after the archangel Uriel allegedly told the men to wife-swap), the Divine-Feminine entity evoked  explains that “Wisdom is a piercing beam, which is the center of the spiritual being of the Holy Spirit, touching from all parts from whence the Divinity sendeth it out . . .” It continues, saying that Wisdom is inherent in what is immortal, including the human soul, and not in things that have an end.  This is standard Hermetic/Gnostic/Cabalist jargon in which Wisdom—the Sophia or Sapientia —transforms soul (psyche) to spirit (pneuma) via the path of the Secret Fire. Further, the patent medieval Hermetic content in the longer citation about the Daughter of Fortitude is rather conspicuous.

The text then goes into doomsday jargon that either could be taken as a prediction about political upheaval or else a veiled way for an affected Kelley to express how really fed up he was with the whole Kelley/Dee trip, as has been speculated by researchers and autodidacts on the subject such as the person who maintains this blog: http://myfavoritemonsters.blogspot.com/2009/07/john-dee-edward-kelley-spirit-world-pt_28.html .

The story goes that Kelley, acquiring fame and fortune as a celebrity alchemist, abandoned Dee and fell in and then out of favor with King Rudolph II (1552 –1612), who imprisoned him for not appropriately proving his prowess as an alchemist. Kelley ultimately died of injuries sustained during a prison breakout—a rather pathetic end to someone who “channeled” such profundity as what is quoted above. But one could suppose that this illustrates the “‘get it’ or get a kick in the head” and “don’t fuck with me” kind of tough love that The Goddess seems to be into.

The catastrophic trend [the Age of Horus] is due to our lack of understanding of our own natures. The hidden lusts, fears, and hatreds resulting from the warping of the love urge, which underly the natures of all Western peoples, have taken a homicidal and suicidal direction.

This impasse is broken by the incarnation of another sort of force, called BABALON. The nature of this force relates to love, understanding, and dionysian freedom, and is the necessary counterbalance or correspondence to the manifestation of Horus.

—from the Introduction of Liber 49, The Book of Babalon, by Jack Parsons

Yes, but if I remember it correctly, Jack, even though you were incredibly eloquent, dedicated, waaay ahead of your time, and now are bestowed god-like reverence, almost everyone you knew, loved, revered, and trusted totally dissed and screwed you over. Then you got blown up moments before you were going to run away and live happily ever after with your conjured Babalon-Incarnate Scarlet woman witchy-chick, artist/occultist Marjorie Cameron (1922 –1995).

Yet shalt thou not be therein, for thou shalt be forgotten, dust lost in dust.  Nor shall the æon itself avail thee in this; for from the dust shall a white ash be prepared by Hermes the Invisible.

But then one could point the finger at dozens of high-profile occultists, “crazy wisdom” teachers, saints, philosophers, and godmen/women through the ages who came to less than beatific endings.

This is the way the world ends. Not with a bang but a whimper.
—From The Hollow Men, T.S. Eliot

One would say that their legacies and legendary statures compensate, but I say not. How can such things serve the dead? Such things are more bread and circuses for the rest of us and often the tool of one or another aggrandizing opportunist. At best, they can be catalysts of insight and transformation for us. Or else, they can be blinds, glamours, and pretentions that complicate our ride through the gastric tube of the Ouroboros. Both options are the purview of The Goddess.

And in the end, the Mysterium Tremendum, for those who are interested, is not about pleasure or pain, suffering in penance or atonement, redemption, the satiation of desire, or the assertion of will. It is about crossing over the Abyss and parting the veil between the Real and the Unreal.

This Mahamaya [“Grand Illusion”; “Great Measurement”] is the Yoganidra [power of stupor] of Vishnu, the Lord of the World. It is by her the world is deluded. Verily she, the Sovereign Lady, forcibly draws the minds even of the wise into delusion. She creates this entire universe of both moving and unmoving things. When favorable, she proffers boons to human beings for their final liberation. She is supreme knowledge, the cause of final liberation, and eternal; she is the cause of the bondage of transmigration and the sovereign over all lords.

But for my final word on all this Babalon and Goddess-mystique stuff, I quote Austin Osman Spare from the Anathema of Zos:

Is there nothing beyond entity? No purchase beyond sense and desire of God than this blasting and devouring swarm ye are?

Oh, ye favoured of your own excuses, guffaw between bites! Heaven is indifferent to your salvation or catastrophe. Your curveless crookedness maketh ye fallow for a queer fatality! What! I to aid your self-deception, meliorate your decaying bodies, preserve your lamentable apotheosis of self? The sword-thrust not salve I bring! 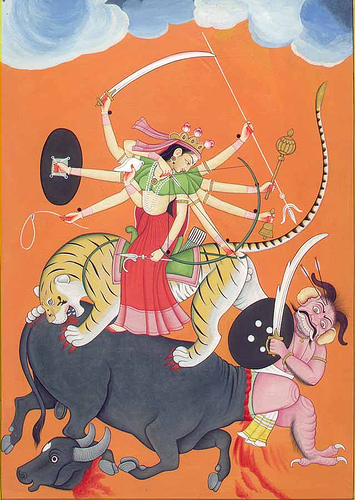