On Sirens: Excerpts from The Fallen Fairy

This is a mashup of a passage about the origins of sirens from the novel The Fallen Fairy, which tells the story of a woman who, being identified as the reincarnation of a mythical creature, becomes the object of interest among sorcerers from another dimension. References to alchemy, medieval occultism, steganography, and sex magic permeate the novel, which is the second in the Sorcerers and Magi series. Within the video above,  Illustrations of Odysseus and the sirens by Waterhouse, Otto Greiner, and Herbert James Draper are paired with sketches of sirens by me.


Sirens were creatures that were half-bird, half-woman. . . . . According to classical myth, they lived on treacherously rocky isles off the coast of Sicily. They wanted nothing more than to entice passing sailors.  . . . these sailors. . . found themselves in listless, dumbfounded stupors from which they languished and died.
It was portended that if a ship passed in which the occupants were resistant to the sirens’ song, the sirens . . . would kill themselves. Thus, it is told in the Odyssey that these creatures leaped off cliffs when the epic’s hero, Odysseus, and his crew sailed by.
The sirens descended to the Underworld where they continued to sing, this time in mourning for the dead. Their imagery became mixed  with that of mermaids who themselves, were the mystical remnants of disposed-of women, who taking vengeance on the violence done to them, lured men to their deaths with . . . the sweetness of their song.
It all meant something metaphorical about men, women, ecstasy, sense control, and, of course, sex and death . . . . 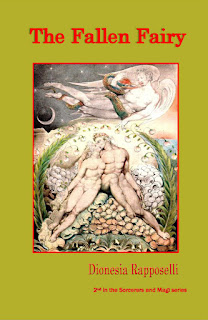 Available through amazon.com.
Posted by Soror ZSD23 at 5:44 PM