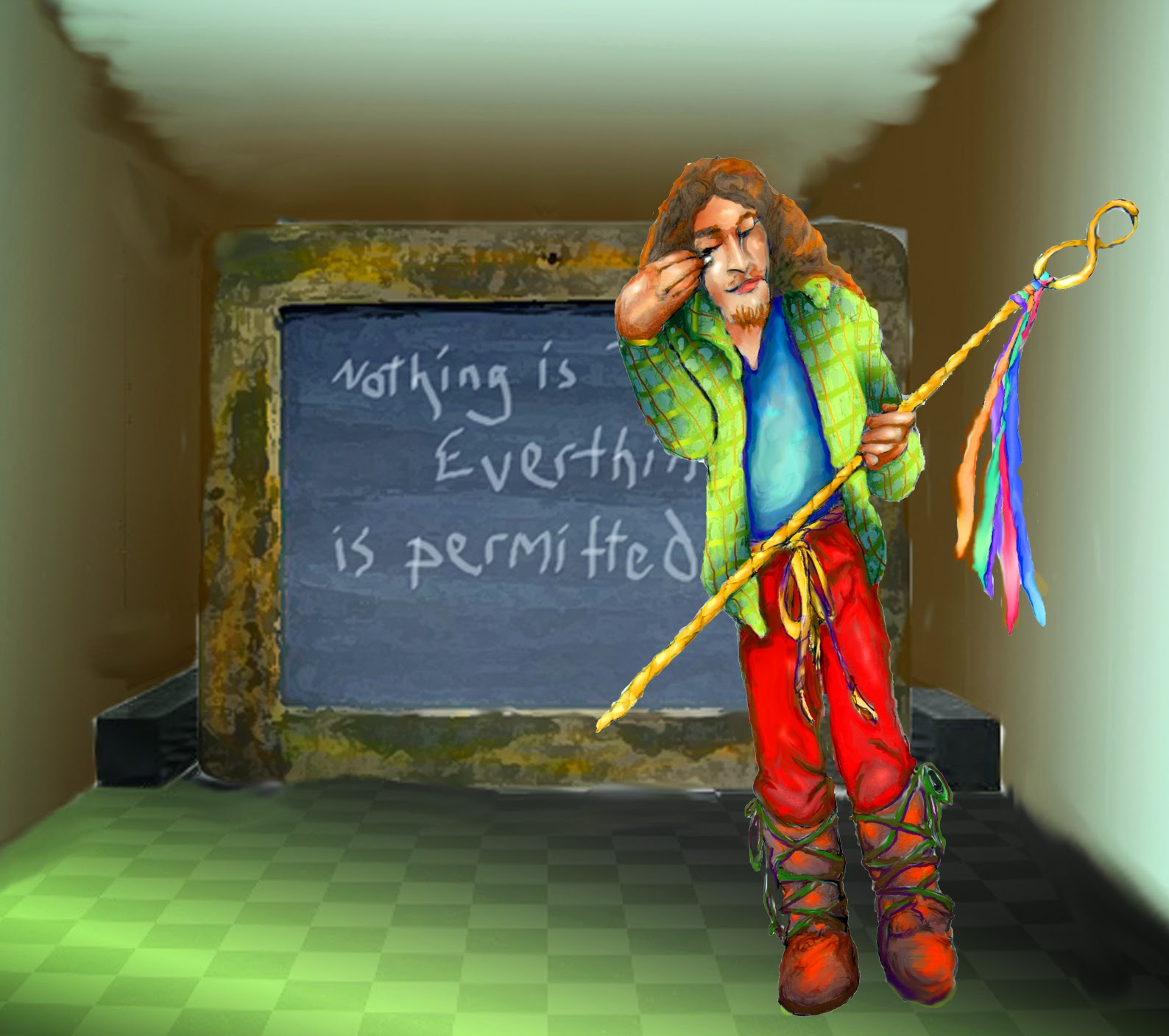 The Crazy Professor was a strange, spaced-out sorcerer who looked like he belonged in a rock band. He taught philosophy at the Bythos Academy. He was heavily involved in charitable work for Deeples and also “Deevees,” the utter dregs of magical society, lower than folk practitioners. Leonard’s father thought The Crazy Professor was a terrorist. It did not surprise him in the least that, within weeks of the H. Trismegistus parent-alumni reception, Professor La Maga was seen cavorting with The Crazy Professor. His name was Aurelio Zosimo.

From La Maga A Story About Sorcerers and Magi

Aurelio Zosimo was a 44-year-old, wry, impish, and obscure-witted academic of early Greek philosophy and medieval Hermeticism. He had been a child prodigy. The prodigious-ness set the stage for him to become, at the mere age of 32 years, the Marsillio Ficino Scholar Emeritus at the Bythos Academy of Magical Sciences.
Zosimo had a plaque on his office door. On it was inscribed a motto adopted by Commons enthusiasts of his brand of sorcery. The plaque read Nothing is true; everything is permitted.

Popular lore had it that the 11th century ascetic Islamic fundamentalist Hassan ibn Sabbah—a mystic and mastermind of an assassin squad—had said it right before he bit the dust at age 90 years, but the saying was actually penned and launched as legend by the 20th century Commons beat poet and career drug-addict William S. Burroughs, in whom a romanticist fascination with Sabbah developed. Outer Plane Discordians and Chaos mages had cheekily spun lore about Sabbah and his alleged pronouncement into cult fiction, conspiracy, legend, and disinformation.

Those of small mind and little vision regarded the saying as an anarchist war cry. To them, the saying was tinged with hedonism of a kind more crass than the generally misconstrued motto expectorated by the notorious Victorian-era sorcerer-mage Aleister Crowley: “Do what thou wilt shall be the whole of the Law.” However, in modern parlance among those who adopted the motto Nothing is true; everything is permitted, it was simply an affirmation that all belief was provisional, not absolute. Because belief shaped perception, which modified behavior which modified circumstance, perhaps circumstance could be modified if belief that modified perception and behavior was deliberately fabricated rather than imposed as unquestioned convention.

From The Savior at the End of Time