On Perseus, Medusa, the Hero, Dragon, and Damsel

And after him rushed the unapproachable and unspeakable Gorgones that longed to seize him. As they advanced upon the pale adamantine shield, the weapon rang sharp and clear with a loud clanging. Two serpents with heads curved forward hung about the Gorgones’ waists. The Gorgones tongues were flickering, their teeth were furiously gnashing, and their eyes were fiercely glaring. Upon the awful heads of the Gorgones, great Fear was quaking.

From the Shield of Heracles. 216 ff  by Hesiod, dated to the 8th or 7th century BCE (passage adapted from a [grammatically convoluted] translation by Evelyn-White). 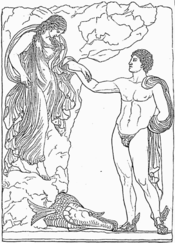 The mythology of Perseus fascinates me. Like the epic Hindu hero and avatar, Krishna, he may have been a real person who live during a proto-historic era and became the stuff of fantastical legend. Both the Mahabharata, which stars Krishna, and the Perseus myth, relate how important dynasties came to flourish. The story of Perseus, however, has very many motifs that are repeated in other western myths and legends—including Biblical legends. More importantly, it is a classic tale about the journey of the hero. I think that elements within it can be interpreted as metaphors about psychospiritual transformation in which chaotic energies are harnessed and integrated into power, wisdom, and true creative force.

In it, we have the hero (Perseus, whose name might mean “destroyer”) representing the solar hero (the son of Zeus and a mortal woman who was born, not through the carnal act but because the god “rained gold” upon Perseus’ mother Danae). He is sent on a contrived quest: to slay the gorgon Medusa, after which he uses the gorgon’s head to slay a sea monster and save the girl of his dreams, Andromeda, who is being sacrificed to it. After that, he goes about numerous other mercenary and political exploits (that include killing relatives in the quest to claim a throne—which was the way it was often done in the “old days” if you look into ancient middle eastern history). In any case, Perseus becomes a well-respected ruler with a beautiful queen by his side and a bunch of kids who further his lineage.

In the portion of the Perseus myth in which Perseus encounters Medusa, we are told that of the three monstrous creatures called gorgones, Medusa (which means “guardian”), is mortal, which is why she is the target to be slain. She and her sisters were the offspring of sea creatures and thus are related to the sea—the primal waters representing the preconscious realm and chaotic primal energy that must be transmuted into real creative force though the power of consciousness. Perseus is aided by several deities to overcome Medusa, namely Athena (logic) and Hermes (mercurial genius). Like other monstrous feminine sea creatures (such as the sirens), Medusa has qualities that are poisonous—or perhaps too profound—for mortal man to experience: gazing upon her directly will turn the viewer to stone. By slaying Medusa (and having the wherewithal to observe her in reflection rather than directly) Perseus conquers wild primal energetic force.

From Medusa’s neck emerge her two otherwise trapped children (conceived through an affair with Poseidon), the winged horse, Pegasus (which means “spring”), and the kingly giant Chrysaor (which means “golden blade”). This has been interpreted to mean that Perseus brought about the end of a drought wherein Pegasus represents the renewed waters and Chrysaor represents grains of wheat. In examining it according to archetypal motifs, we also can interpret it to mean that a wondrous transformation occurred whereby the chaotic and latent primal energy of the hero is transformed into something of beauty, substance, and efficacy.  After all, Pergasus flew up to Mount Olympus where it became a pet of the gods, and Chrysaor became a beneficent king.

Although later (Renaissance) illustrators of the myth show Perseus flying away on Pegasus, Perseus actually travelled around via winged sandals bestowed upon him by Hermes. He comes upon the damsel Andromeda (a name which means “queen of men”) who is chained to a rock as a sacrifice to the sea monster Cetus. Pegasus uses Medusa’s severed head (that is, he used the transformed creative energy that he has mastered) to kill the sea monster (which is just another symbol of the primal chaotic energy that needs to be conquered) and saves and marries Andromeda. Just as Medusa and Athena might be thought of as two poles along a spectrum within the consciousness of Perseus in the earlier part of the myth, Cetus and Andromeda are also two aspects of the same thing—the soul in desperate need of rescue from the chaos it arises from. It is rescued by the light of higher consciousness, represented by Perseus. The monster in a sense becomes the damsel by joining with the animating and integrating solar hero. Thus creative energy manifesting as the individual soul (represented as Andromeda) is redeemed by divine spirit (represented by Perseus). The soul in turn gives form to spirit so that it might participate in creative acts.