The Arbatel is a medieval treatise on how to live in harmony, ease, and intimacy with the energies of the Multiverse. Behind the Christian piety is a more ancient, Pythagoric and Neoplatonic spiritual paradigm that views the world as a multilayered place full of spiritual beings: some elemental, some celestial, some angelic, and some demi-godlike, archonic, or patriarchal. 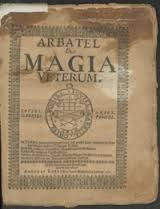 At first glance the Arbatel is a simple of book about magic that seems to be an introduction to a more robust text that does not exist or does not exist anymore. Except for the suspicion that the Arbatel was written by an Italian mage, the author and original date that pen was put to paper are unknown. What we have of the text was commercially published as part of an anthology in 1575 in Basel, Switzerland, on one of the first printing presses.

The Arbatel can be freely accessed at http://www.esotericarchives.com/solomon/Arbatel.htm thanks to Joseph H. Peterson who provides a side-by-side annotated version of the original Latin text and an English translation, published in 1655, by the 17th century Cambridge University scholar Robert Turner.

The subtitle of the Arbatel says that it is made of nine books or chapters (tomos), each of 7 parts (totaling 49 parts in all). But it seems as if the only  existing book is of the Arbatel is the first, titled the Isagoge, which the author explains means “Book of the Institutions of Magic.” It consists of “the most general precepts of the whole Art.” The other eight books are supposed to delve into:

● Microcosmic magic, which is described as being about how a person may gain wisdom and insight about purpose through contact with the “spirit and genius addicted to him from his nativity” (that is, an augoiedes or “guardian angel”).
● Olympic magic, which presumably delves deeper into how to work with the Olympic Spirits than what is presented in Septenary 3 of the Isagoge, and, thus, relates to planetary or astral magic.
● “Hesiodic and Homeric” magic, which claims to be about working with spiritual allies and benefactors, using the Greek term calodaemones, which is a synonym for eudaemone and also augoiedes, all more or less equivalent to “guardian angel.”
● “Romanic or Sibylline” magic, which, we are told, is about working with the tutelary spirits and lords that tend and govern planet Earth and is said to be similar to Druidic magic.
● Pythagoric magic, which relates to the sciences of physics, medicine, mathematics, alchemy, and other arts, we are told.
● Magic related to the work of the Neopythagorean Apollonius of Tyana (circa first century—a legendary person whose birth and miracle-working was suspiciously similar to that of another, far more popular legendary figure: Jesus of Nazareth). The magic referred to would be thaumatergy. The author of the Arbatel also notes that Appolonian magic is Microscosmic (about the individual self) but also gives a person powers over hostile spirits (presumably a reference to exoricism).
● Theurgic magic, described as “Egyptian magic” and “divine magic.”
● Prophetic magic, which is said to be “wisdom that solely depends on the word of God” and, given the jargon, may be a reference to Cabala, the medieval Christian variant of Kabala that was wholly absorbed into Western Occultism instead of Christianity.

Rather than being an incomplete book, it may be that all of the themes described above are really secretly layered into the book and waiting to be discovered like buried treasure. That is, the Arbatel may be an example of medieval steganography in which messages are encrypted and buried within "cover texts."

I took interest in the Arbatel in the spring of 2010 after stumbling upon an article by Nick Farrell in the spring issue of the Journal of the Western Mystery Tradition. The article was titled Olympic Spirits: The Hidden Gods. It can be accessed online at http://www.jwmt.org/v2n18/olympic.html. Like Farrell and others who have explored the Arbatel, many questions arose about its meaning and application.

My background in Eastern spirituality influenced how I approached the Arbatel, which was openly, with an understanding that what I was attempting to access “out there” was an intimate part of myself or vice versa. So I dispensed with the more elaborate traditional ceremonial formalities regarding evocation and planetary magic derived from Solomonic and Late Modern-era Hermetic paradigms that others have applied when working with the document. See the Everything Arbatel Digest of Internet Links at http://seethingamongthesuits.wordpress.com/2009/10/12/everything-arbatel-digest-of-internet-links/ for an index of what is available about the Arbatel on the Web.

I began what was to become the first phase of the work on Monday March 22, 2010, which serendipitously was the eve of that month’s new moon. This first phase of the project continued through to Sunday April 18. It consisted of daily evocation and meditation on one or another Olympic Spirit. The YouTube below is a distillation of this phase of the Arbatel working.

I posted the first month of my experiences on a blog.The posts garnered some interest, and I found myself being invited to join three other people in a group magical working related to the Arbatel. The first phase of this Working took place in May and the second in July 2010.

The group's focus was a part of the Arbatel that I had initially overlooked: The Seal of Secrets of the World described in aphorism 27, fourth septenary:

Make a circle, with A at the center, which is BCDE. At the East of the square is BC. At the North CD. At the West DE . At the South EB. Divide each of these quadrants into 7 parts so that there may be 28 parts total. Then divide each into 4 so that there will be 112 parts of the circle, as so many are the true secrets to be revealed. This circle divided in this manner is the Seal of Secrets of the world. Projecting from the center A, this is the invisible God in the entire creature. The Prince of the Eastern secrets is in the middle [of the Eastern quadrant] and has 6 Nobles, 3 on each side. Each of them, including the Prince, has 4 Nobles under him. In the same way, the [other] Princes and Nobles have their quadrants of secrets, with their four secrets. 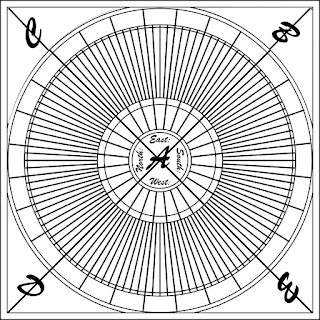 My cohorts pointed out that the 28 parts that each quarter of the diagram is cut up into correspond with the mansions of the moon. The mansions of the moon are the daily moon phases that ancient esotericists across cultures were very much attuned to. Each phase of the moon, day-by-day in a 28-day cycle, carried with it a certain mood and theme that was thought to have a fateful effect on people’s lives. Activities had to be deftly synchronized with daily—and even hourly—planetary and lunar events. The early medieval Arabic magical book known as the Picatrix covers this in detail.

Before retiring, we would acknowledge the moon mansion of the day and its corresponding ruling planet/Olympic Spirit and perform whatever preparatory ritual we each saw fit to do. Then, as we were drifting into sleep, we would visualize the sigil of the Olympic Spirit .

We kept a group dream log on a secure, on-line site and also kept a lively discussion going through a now discontinued Google Wave application.

My experiences with the Arbatel and insights into the text are unique. They have been documented in the book The Seal of Secrets of the World Adventures in Astral Magic (available through amazon.com). Below is a somewhat clunky video of a presentation I gave about the Seal of Secrets at the biannual Metaphysical Forum held in New Haven, CT. A free, concise pdf download about the Arbatel  and Seal of Secrets can be accessed through the Sorcerers and Magi Website 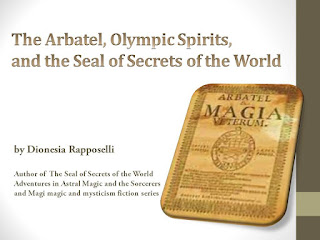 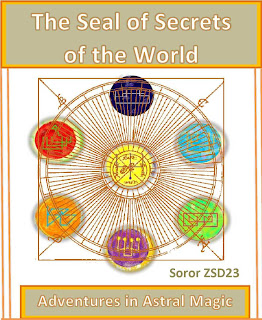