Calling on the Angels 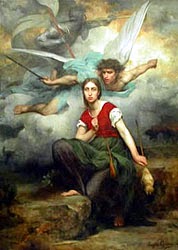 A few years ago, I did .some meditation and dream experiments with. the Olympic spirits, which are the Roman gods re-positioned as planetary intelligences in a late medieval book called the Arbatel.  But medieval and modern magic have a much greater interest in angels associated with the seven planets:  Michael, Gabriel, Camael, Raphael, Sachiel, Haniel, and Caffiel. Evoking them is my new project.

I had been trying to do with for years with fits and starts and little success.  A reader even  had had some correspondence with me regarding my Arbatel working telling me that I ought to try my luck with evoking angels.  Of course, his point was to immerse myself in the complexities of hoary Rosicrucian/HOGD and Enochian norms.  Ain’t got time for that.  Especially that I rather feel that I’m approaching an intimate part of myself when I do this stuff--or at least that I am being intimate with something I share the intimacy of Being with in a monistic paradigm.

Now that a few years of an oppressive work and commuter schedule has become part of my past, I have returned to meditative practices.  I have been spending part of my meditation time in traditional silent meditation and the other half fixating on the sigil of the angel associated with the day of the week and seeing what insights and impressions appear to me.  This time, rather than sharing my impressions in a diarist approach, I intend to share my impressions through a series of paintings in the coming weeks and months.

Very many people claim to be in contact with angels, whether they be occultists, New Agers,  Christians, or others.  Some have even made a nice business of it.  But working with spiritual entities, which are really parts of ourselves, is highly individualized. I think it would be good to approach these projects in a personal and highly individualized way but also in a way in which  practitioners can hold some insights close to their hearts and share others in a free and open exchange about self revelation and commiseration rather than in a way that sets someone up as a self-proclaimed “specialist”or authority. It is fine to be inspired by someone else’s experience, but, ultimately, you have to have your own. Frankly, there is no one there to deliver you, you must deliver yourself.

In my period of stops and starts regarding angel evocation, I had wanted to make the project a group one, but could not muster the interest—either in a Facebook group that I briefly relaunched—or in a small “grove” of women I have been circling with for a few years. Is it a shame? I don’t know. But I have launched my project finally on my own and am letting you know.

Michael's message for today...Love yourself.

Excerpt from The Fallen Fairy, from Chapter 7 A Giant Pink Dragon

She closed her eyes and envisioned the sky as if jettisoned into the vault of night: the myriad of stars spied when the evening was clear and the moon was new. The scintillation before her eyelids was merely the effect of over-breathing from stress and sobbing. Still, with wet eyes and bitter endearment, she held the image of Michael in her mind and while uttering the name envisioned his angelic namesake. Micha-el, “Who is like God”: a towering archangel, shining white and made of fiery light who subdues chaos and guides and protects souls as they traverse the spheres. He was the crown of the secret fire and guardian of the interspaces between the end and beginning.
Bella let it embrace her. She imagined it being virile and great, like Michael had been. She let it pity her tenderly and gently command the cessation of tears. Its potency grazed her face. Her sinuses, impacted with bitter tears, cleared. Then she could breathe. A calm feeling overcame her.
So she rested with that feeling of communion with that presence (whether it came from within or without) until dusk descended and then night. 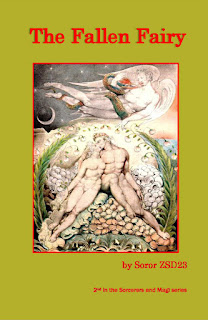