This past month, I worked with the Stele of Jeu, a text from the Greek Magica Papyri Six years ago, I did some solo and group work with a medieval magical document called the Arbatel. It was an exciting time. When involved with the Arbatel project, I kept a blog about it. I intend to do the same with my work with the Stele of Jeu, which will shed light on context and also provide insight to other practitioners on new ways to make the text relevant and workable for them.

The Stele of Jeu is a tract within the Greek Magical Papyri and is designated as section V 96-172. The Greek Magical Papyri is a compilation of highly syncretic texts that date from the 2 century BCE to 5 century CE of Hellenized Egypt. They are Greco-Egyptian magical spells and are loaded with references to Egyptian, Greek, Gnostic, Orphic, and Hebrew deities—sometimes all in the same document. 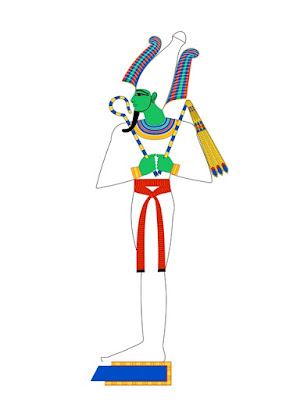 Scholars have said that the Stele of Jeu is an example of an exorcism, given a recurring line in the document that requests deliverance from a spirit. Modern occultists, however, treat it as an exercise in self-transformation—theurgy or apotheosis—in which the aim is to identify with deity.

The document is popularly known as the Bornless Ritual based on interpretive ideas applied to it by late 19th/early 20th century occultists—namely founders of the Hermetic Order of the Golden Dawn and Aleister Crowley. It is also known as the Headless Rite because the text is directed to a deity referred to as Akephalos—Greek for “Headless One.” The term could refer to any number of obscure ancient headless deities and it is often assumed to refer to an Egyptian one, but it could refer to something else entirely. 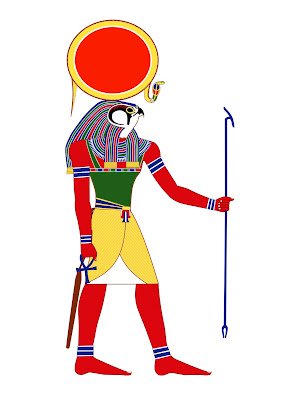 John Colman Darnell  tells us in The Enigmatic Netherworld Books of the Solar-Osirian Unity, which deciphers hieroglyphic content from the tombs of Tutankhamun, Ramesses VI, and Ramesses IX,  that Akephalos refers to a Greco-Roman deity associated with the Egyptian Osiris in the form of—not a mummified god of the underworld—but a solar deity (Ra-Osiris).1 The author provides consensus evidence, based on archaeological finds and Egyptology research, that the head of the headless form of Osiris is the sun and that the solar Osiris is one with Ra. The of concept of a solar/progenitor Osiris is affirmed in another scholarly text, which also points out that (and how) the Stele of Jeu associates Ra-Osiris (as Akephalos) with the god of the Hebrews.2 The author also points out that the term Akephalos is associated with the Egyptian god Bes in two other sections of the Greek Magical Papyri.  Bes is a beneficent solar deity.

Lines within the Stele of Jeu, while referring to epithets of both Osiris and Yahweh, also may point to Ra. For example:

You who created the Earth and the Heavens (Geb and Nut—technically Ra’s grandchildren by Shu and Tefnut),
. . .
You have made the Female (Tefnut) and the Male (Shu).
. . .
You have produced the Moist (Tefnut—goddess of moisture) and the Dry (Shu—god of air) and that which nourishes all life.
Also, just as the orator in the Stele of Jeu ultimately identifies with the supreme progenitor solar deity, so too do souls who successfully traverse the underworld become Ra in Egyptian afterlife spirituality.3 Just as Osiris becomes self-realized as Ra, so too does the worthy soul. 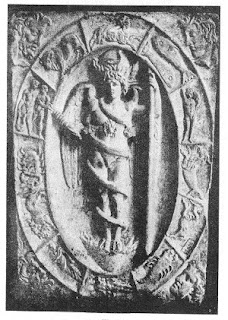 Reference to Phanes, an Orphic solar deity that personifies the Light of Creation and is associated with Eros (Life Force) and Aion (Eternal Cyclical Time), also may be read into the last lines of the Stele of Jeu, which say: “I am the Grace of Aion. My name is a heart encircled by a serpent.”  Phanes, according to the ancient Greek historian Diodorus (90 BCE- 30 CE), was identified with Osiris among the Orphics, and the neoplatonic apologist Proclus (412-485) identified Phanes with Dionysus, who was generally regarded in the ancient world as a Greek equivalent of Osiris.4

Although Akephalos is assumed, in occult circles, to refer to Osiris, it may sort of refer to God as the supreme Divine Light, known by different names in different cultures and most familiar to Egyptians as Atum or Amun-Ra. The Stele of Jeu calls the deity Osoronophris (“Beautiful Osiris”) and Iabas and Iapos (Samaritan names for Yahweh)5 and also uses Hebraic godnames and anagrams within the strings of “barbarous terms” within the text (e.g., Iao and Sabaoth). The Late Classical Era Gnostic deity Abrasax is thrown into the mix as is Aion and presumably Phanes. These names might all be being used in a syncretic way as terms for one redemptive/restorative and supreme divine principle.

Preparation for the Rite

Face north, “write the formula” on a parchment, “extend” across the forehead (ie, write the formula, which includes 6unknown godnames, and wear the parchment as a headband. The modern tradition has been that the formula is the godnames: Aoth, Abaoth, Basym, Isak, Sabaoth, Iao.) Say:

“Make all Spirits subject to Me so that every Spirit of the Firmament, the Ether, Earth and under the Earth, dry Land, or Water, Air Fire, and every Spell and Scourge of God may be obedient unto Me!”

I am Moses, your prophet, to whom you have revealed your Mysteries, the ceremonies of Israel.
You have produced the Moist and the Dry and that which nourishes all life.
Hear me, for I am the messenger of Phapro Osoronnophris, which is your true name, handed down to the prophets of Israel.

I invoke you, awesome and invisible God who dwells in the void of the spirit.
Arogogorobrao, Sochou, Modorio, Phalarthao, OOO, Headless One.
Deliver this person from the spirit that restrains him.

Deliver this person from the spirit that restrains him.

He is the Lord of the Gods.
He is the one who the winds fear.
He has made all things by the command of his voice.
Lord, king, ruler, and helper.
Save this soul.